The Physical Laws That Govern Your Comfort

As professionals, we understand the laws of physics that are at work creating your problems, and that will also be part of the solutions. We know—“This always happens”. Or “When this happens—that happens. Always.”

Heat Moves from More to Less

There’s no cold—it’s just less heat. There’s heat and more heat. And heat moves from more to less. The bigger the temperature difference (on different sides of a ceiling, duct, wall, or floor), the faster it moves.

And the greater difference in air pressure (on different sides of a ceiling, duct, wall, or floor), the faster it moves. This explains a lot. Since air carries heat, in or out, this is very important.

Conduction is when heat moves molecule by molecule through solid materials. An example would be when your attic is cold in the winter, it makes the drywall ceiling cold if you don’t have enough insulation. The heat from the room moves into and through the cold ceiling. This makes your room cold as heat is lost.

Convection is heat carried along by air (or water) movement. That’s how we heat our homes. Heat air with a furnace (or water with a boiler) and send that air (or water) to the rooms we want the heat in. But it also works against us when the air leaks out of the house and takes heat with it.

Radiation—all objects that are warmer than objects around them emit heat in the form of infrared waves. They are either giving off heat or absorbing it. It’s how a radiator works. It’s how that hot drywall ceiling from that 125-degree summer attic radiates its heat into our rooms.

Moisture Moves From More to Less, and Hot to Cold.

We find a lot of “building durability” issues. That means mold and rot. Understanding what direction moisture is flowing and how a wall, ceiling, floor or roof can dry is important.

Closely related to the last one, this explains condensation issues and many mold issues. It also explains something we are all familiar with – rain. A pretty powerful concept.

Most of us know this already. It’s how a hot air balloon flies. When we heat the air in our homes, it rises to the top—a very significant fact because that’s why air leaks out.

Now let’s talk about three “composite” Laws we use here at Logan Home Energy Services. Key concepts that use more than one of the above Laws of Physics that are at work in your home.

They are “The Stack Effect”, “The First Law of Holes” and the “ABC Priority” for air sealing.

When we heat the air in our homes it becomes lighter than colder air. This buoyant air rises to the top of our house and leaks out of many dozens of places, some large and some small. Since your attic is vented, think of the attic as outside. 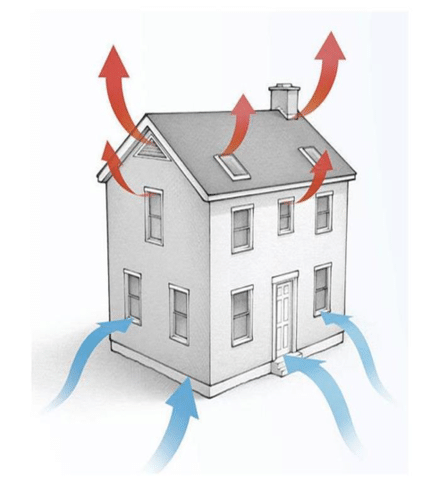 The air that leaks out take our heat, comfort, and money with it. The air that leaks in is cold in the winter and hot and humid in the summer, and has dust in it making us uncomfortable. We have to add heat (money) to this new air so we can be comfortable. But once we heat the new air, it rises and leaks out of the top of the house again, and new outside air leaks in at the bottom to replace it again. The cycle never stops.

“The First Law of Holes”

This is very important. It says that the amount of air going through a hole depends on two things—the size of the hole, and the amount of pressure difference across (on the different sides of) the hole. What this tells us is that some holes are more important to seal than others—and some are way more important.

That’s right. It’s called the “neutral pressure plane”. It’s that point in the middle where if you drilled a hole in the wall air would leak neither in nor out because there is no pressure pushing it through the hole one way or the other.

Hmm. So let’s see. Positive pressure at the top, negative at the bottom, and neutral somewhere in between. So does that mean if you’re at the top but close to the middle it’s less positive, and the farther up in the house you go it’s more positive? Right again! And the same for the negative side.

Not that you wouldn’t seal any hole that you could get to, but if you just work in the middle of the house, you may not be reducing drafts, overall air leakage, or the comfort of your home very much at all if you ignore the (hard to get) leaks at the very top and very bottom.

Getting back to the First Law of Holes—leaks in ducts when the ducts are in an attic or garage or the other unconditioned space are the #1 priority. Why? There is a LOT of pressure pushing air through those duct leaks because of the blower in the air handler.

Because of the Stack Effect and the First Law of Holes, Logan Home Energy Services has developed our ABC air sealing strategy to get the best results for you.

A is for Attic—because that is the top of the house where the most air leaks out. Leaks are hard to get to and attics can be extremely difficult to work in, but the results are worth it.

B  is for Bottom—the basement or crawl space. This is where most of that new evil outside air is coming in.

C  is for Conditioned Space—After the air leaks at the top and bottom are taken care of, then it makes sense to work here, in the middle of the house. This is where the majority of the windows and doors are located.